Accumulo comes with a lot of tests. This note is about the scripts in the test/system/continuous directory. The README is very descriptive so there is no need for me to discuss what the tests do. I'm just doing a show and tell. After creating an Accumulo cluster, you'll ssh to the master node to install Parallel SSH (pssh).

Now you can run the continuous programs. I've created the editable files so you can just copy my versions (Step two below). The start_ingest.sh script starts ingest processes on the slave nodes which was not immediately obvious to me. Watch Watch http://affy-master:50095/ to see the ingest rate. When you've got enough entries, run the stop-ingest.sh.
The figure below shows the ingest rate running two nodes on my MacBook Pro inside VirtualBox. My setup won't win any speed awards! 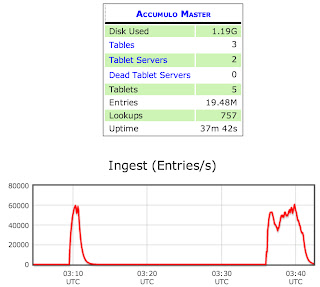 The next scripts we'll run are the walker scripts. They walk the entries produced by the ingest script. The output from the walker scripts are found on the slave nodes in the /home/vagrant/accumulo_home/bin/accumulo/test/system/continuous/logs directory. Watch http://affy-master:50095/ to see the scan rate.
Below is an example of the scan rate

And finally there is the verify script which took about 15 minutes to run on my setup. You can visit http://affy-master:50030/jobtracker.jsp to see the job running